It hasn’t been easy being green over the past decade or so.

The hardship endured down the years by our Western friends is palpable. Connacht have rarely been given a fair crack of the whip, have had their most famous ode taken away from them (it’s in Galway, Munster fans) and, bar some notable big days, have never really looked consistent enough to threaten the other province’s domination.

They’ve been dubbed a ‘development’ province, patronised and been unlucky in many ways.

But there’s also another side to the story. While having reached the hallowed ground of the Heineken and duked it out with the big boys, Sarries, Toulouse and Quins most notably, Connacht only got there with help from others.

There’s also been a sense, rightly or wrongly, of ‘woe is me’ not helped by some incredible comments from Tom Sears after the McCarthy transfer.

And then there’s the results. 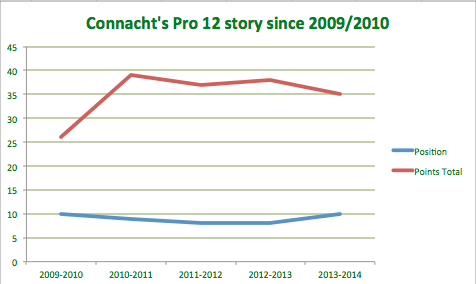 While some progress has been made off the pitch on supporter base and stadium, Connacht haven’t exactly set the pro 12 alight. In fact, since the Italians came into the league in 2010, the points total and position has remained quite stagnant.

Make no mistake about it, it’s a big year.

For 14/15, it’s time to put up or shut up.  No longer the poor relations of the IRFU, Connacht have been given extra funding and an extra incentive with a more meritocratic league. While some Welsh journalists have been quick to dub it a ‘new era’ for the Welsh sides, after the first two weeks it’s Connacht who are the league’s success story.

With a backline filled with indigenous or young talent and the Westies have navigated two tricky ties against teams who were said to be similarly on the up. Last weekend’s 1 point victory in the cavern of Murrayfield will be particularly pleasing. Despite not playing well at all, they eked out a win in a game they perhaps would have lost before.

The drop down to the Challenge Cup could also be a blessing in disguise. The visit to Exeter will still bring in a bit of coin, though more importantly, the league can now be the key concentration. Lam’s honeymoon period is over and with Aki, McCartney and of course Old Mils on the way soon, momentum will be critical. As per usual, a gnarled pack will lead the way, with front row in particular looking a strength. Nathan White is a solid base, and despite injuries at hooker, Tom Mccartney will provide some Super Rugby class and experience. Denis Buckley has started the year very well. In reserve, some people would be well advised to take a closer look at Rodney Ah You, derided in some quarters but coming on in leaps and bounds.

Truthfully, even with the new signings and optimism, the squad still looks paper thin. There’s a sneaking suspicion that Muliaina is coming in for more of a coaching and marketing optics role which might limit his impact.

At 10 in particular, the retirement of Dan Parks, while not bad news for the province, has certainly impacted the depth chart. Carty is an excellent talent. But a rough patch will come at some stage and injuries will hit. The question remains, will he and others have the experience to navigate the storm?

It’s here the likes of Muldoon, White, Swift and Muliaina will need to step up to a leadership role. But perhaps more importantly, it’s critical now that Marmion, Henshaw, McKeown and Heenan really step up. At Leinster, the likes of Ruddock and McGrath have long been part of a core leadership group. Connacht’s younger men must take a step forward. Ironically, the hope will be that Schmidt continues to ignore Marmiom, given his growing importance as the pivot of the side.

Success this year, as has already been stated by Gavin Duffy and others, will be a 6th place finish. Nothing more or less. This will take a jump from the 35-38 points market towards an end of season total of 54-56 one estimates.

To do that, Connacht will likely have to beat Edinburgh, Dragons, Scarlets and Cardiff to the spot, and start to turn some heroic losses into victories. No mean feat.

Away games in Wales in February and March will likely seal the fate, so the squad needs to be managed intelligently, perhaps at the expense of a tilt at the Challenge Cup. Connacht had 7 LBPs in last year’s tournament, the second highest. In the MLB, teams statistically measure the ‘extra wins per season’ that new players will likely bring. Maybe the addition of some quality and less European stress might indicate more success. My prediction? They’ll be close, but no cigar come May.

The ‘new era’ gets its first big test against champions Leinster on Friday night. No doubt there’ll be bile in the air as usual, but Connacht need to move beyond peaking for these big games and letting themselves down elsewhere.