It was a picture so staged and contrived that one wondered whether the IRFU press team were actually having an in joke, or perhaps taking the piss out of Declan Kidney, the Irish fans and the media with this new recruit.

‘Take up that stick there Benty and give us a pose!’ 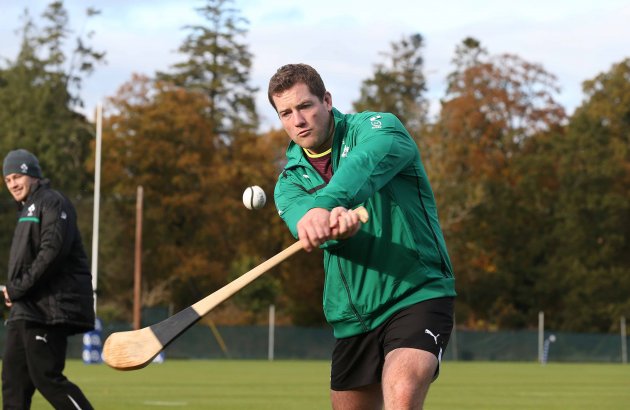 Fresh off the plane from New Zealand and ready to be thrown into the white hot heat of battle, we knew little about the Taranaki man, other than the fact he was known by Greg Feek, had played both sides of the scrum, had a sister here and came off the back of a successful season.

Since then, the story of Michael Bent has been one fraught with dismissal, often outright derision and at times, from certain quarters, an unfair contempt.

And yet, the scorn around Bent is mostly down to the fact that he’s measured incorrectly.

Bent never was, and is nowhere near an international prop standard. So it’s wrong to measure him in this way.

Whatever Mr. Feek told Mr. Kidney and Mr. Schmidt about his talent, it was incorrect. Bent saw a meteoric rise and fall, from winning a penalty against South Africa with his first action to struggling in the bottom rungs of the Pro12. But gradually, he has found his level.

Like most Leinster props, his first 12 or so months were defined by an inability to lock a scrum, and a problem getting to grips with the pace and style of the Leinster game. Ask Mike Ross, Jamie Hagan, Tadhg Furlong or Stan Wright what’s expected of a Leinster TH, and they’ll tell you the same thing.

However, having gotten over this hump, Bent has proven his worth. With a long back and a little less weight than most ‘barrel shaped’ tightheads, playing at #3 was always going to be difficult. Yet, he has grown into both a passable tighthead, even at European level, and actually quite a solid, dare I say destructive LH (his original position).

Every team needs it squad members. In fact, those guys who make up the 23 when marquee players are injured, or away with Ireland, can often make or break a season. In recent years, Leinster have made up ground with good wins during the 6N period for example.

In reality, Bent will, barring a lot of injuries, never play for Ireland again, but he’s an increasingly important part of Leinster’s squad.

Yet the muck keeps being slung. It’s a situation reminiscent of Tom Court, where people forget that he’s actually quite a good LH, and let the media focus on one bad day in Twickenham cloud judgement.

In the past three weeks, we’ve had separate instances from those delightful media trolls George and Neil (funny, Mr Francis’ recent issue with ‘the gays’ seems to have been neatly forgotten doesn’t it?). Here’s what these charming, always conservative fellows had to say:

I would ask whether either of the two had watched any of Bent’s performances at LH in the Rabo last year. But of course, that would be a moot question wouldn’t it? Imagine, an Irish analyst actually doing some real analysis!

Similarly, the mood within Leinster’s fanbase has been unforgiving, with Bent being actively booed by a section of the ‘ultras’ in the RDS terrace in recent weeks. Delightful stuff.

Personally, I like to look at it this way. In the past few weeks, Bent has played:

This weekend, with no tight head cover and a half fit Tadhg Furlong, he will likely play 80, switching across the scrum near the end.

That’s not easy, nor is it something that any other prop in the Leinster squad can do. Anyone remember the last time Jack McGrath played on the other side for example? Paul James does.

Taking a step back, and removing from the equation that the guy was (wrongly) parachuted into the national squad, due to a lack of passable props at the time, Bent is at best a third choice LH (fourth choice last year, until Jack O’Connell left) and a fourth choice TH. There’s a good case that he’s one of the best players in Europe in this quite valuable position.

He’s likely on peanuts, and at worst, is a passable, ‘ambipropsterous’ player who’s always available and content to sit on the bench. That’s worth a lot of weight in squad gold. If Billy Beane turned to rugby, Bent would be one of the first players he’d pick up.

The season isn’t nearly over for Benty, with Healy out, McGrath overworked and semi-fit tightheads, he’ll be needed again. He’ll continue to be derided and jeered by those who refuse to actually watch him, or fail to measure his worth in reality terms, rather than international terms. Except of course lads like George and Neil like to crow about the ‘price’ of everything, but know the value of nothing.

Anyway, if nothing else, he can always turn to the hurling eh?